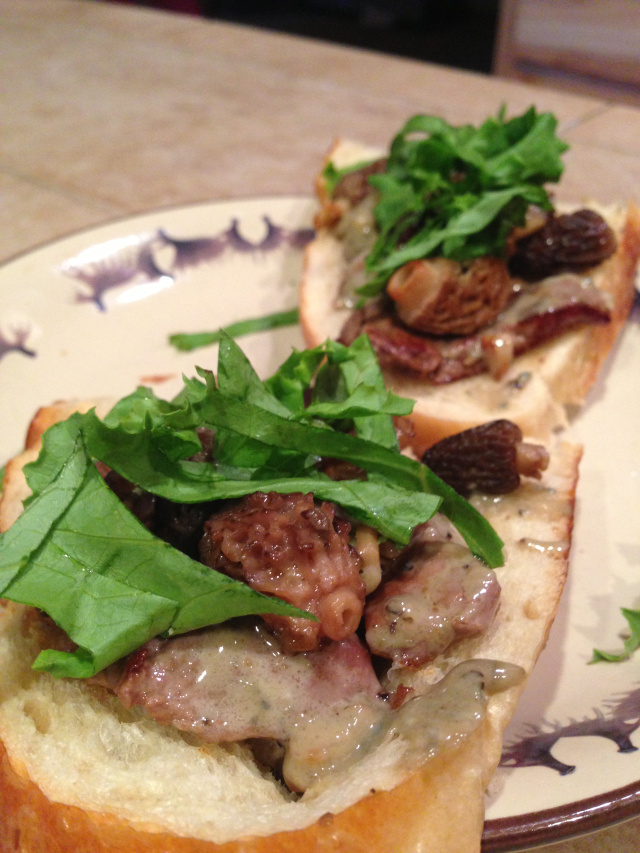 The War has begun for the Morel King Title and the holder of “Precious”.  The Morels just started to pop with this burst of warm weather and I am predicting a great season for 2013.  Yesterday, April 25th 2013 I took the day off work to go enjoy a full day of walking in the woods with my good buddy and competitor Trevor Storlie.  We had a nice drive up to Trout Lake, Washington where I knew a prime spot for Morels.  We first had to stop at the gas station so I could fill up and Trevor could get a magazine with his picture in it.  SO VAIN!

The morning hike in started with a first strike out of the gate for me, with one on the trail.  We get up into a clearing I knew about where the sun hits it perfect.  I checked the ground temperature at 58 degrees and which is excellent news.  It was on, Trevor slithered off one way I went the other and the hollering “Found one” begins.

What we like to see in the woods as a good indicator is false morels.  You do not eat these, but it does tell you that the ground temperature is good, and there is moisture in the ground.  They always grow before the actual morel, I think they need about 52 degrees before they start popping.  But do not eat these they will make you sick.

We take a little break because Trevor likes to use his son’s little sand bucket.  So we have to take a break to dump his bucket.

After about a solid hour of picking one area we both produced about 90-100 morels, but still had a few hours left and a couple more areas to check out.

We didn’t have as much success in the other areas, but still found some.  The temperatures in the soil were still to cold to produce, and we are looking for that magical minimum of 56 degrees.  We counted both piles and he came up with 180-179.  I lost by one mushroom and this was my honey hole.  I could have pointed him into another direction and scallywagged him, but I didn’t.  I lost round one of many to come, keep in mind he had really, really small mushrooms.

I wash my mushrooms very well, to get the bugs out I use salt in the water, and I rinse and drain several times, then soak them for an hour before putting them on the cookie sheet to dry.

Once they are dried I put them in the refrigerator.  I keep about 30 for meals for the next few days and dehydrate the rest for the remainder of the year.  I know I will have lots of morels to eat fresh this year.

I chop two garlic cloves, I take a handful of small morels that Trevor likes to pick. I add them to the pan with butter and saute them until the garlic is brown.  I add sliced tenderloin to the pan and brown both sides, do not over cook.  Salt and pepper.

I take 1/2 cup of white wine and reduce it to half, add about 4 tables spoons of good blue cheese and melt and mix.  The key here is the Sourdough bread.  Toast it.

Take the meat and put it on bread, along with mushrooms and garlic.  Pour a little fo the blue cheese sauce, and top with Arugula.

I tell you its MOUNTAIN MONEY!!!

I dehydrate the others and add them to the closet stash.  I will probably have five of these for the rest of the year to cook with, that is my goal.  Plus eat about 300 more while the season last.

Get out there and find some.

3 Comments on “Morel Mushroom Season is on like DONKEY KONG”