Smoked King Salmon for my Pappy

Posted on November 5, 2013 by huntingchef 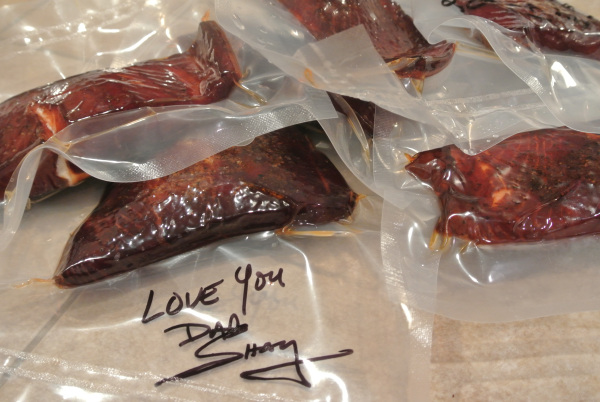 Sorry folks, I have been too busy this year to blog. Just finished up Salmon, Buck, and Elk season this year. Along with all my other duties and family time I just did not feel like blogging. However, Dad called me on the phone to ask me if I would make him some smoked salmon and send it to him down in Arizona once they arrived there. He loves smoked salmon and it is one of his favorite time of year. After all, we had a stellar fishing season this year and you have to keep everyone happy.

I am not sure what the final counts were for the Kings, however, I do recall being around 74 kings harvested out of our boat.

It was not a major silver run, though some were caught on the Columbia river they were not as big as normal and not as many of them.  I targeted Kings majority of the time while fishing Buoy 10, in Astoria Oregon.

The buoy 10 fishery can be epic, it also can be full of boats and idiots that should not be on the water.  One boat sunk on the bar, several other collisions and a large commercial guide came in and knocked everyone out of the fishing hole that some of us were hovering on and ended up hitting the bridge and tearing his control bridge off nearly capsizing his vessel.  This fishery never ceases to impress with me with the bozos that do not pay attention.

Well let’s get on with the smoking of the fish, shall we?

The first thing that you need to do is brine the salmon.  There are dry brines and wet brines.  I choose to do the wet brine because I think it remains more moist, but that is my personal opinion.

I use a basic brine and you want to use plastic or zip locks to hold your fish while it cures.  I use large zip locks.  I cut the fish, and try to remove all pin bones if I can.  I usually cut them in three-inch width but it really doesn’t matter too much the actual size.  In each bag I put 1/4 cup of soy sauce, 1/2 cup of non-iodized salt (make sure it is non-iodized this important you do not want a metal taste) and 1/2 brown sugar in each bag.  I also add two tablespoon of garlic powder, and 1 tablespoon of all spice to the bag.  Put the bags in the fridge for 18-24 hours, and flip them as many times as you can.  The next morning, dump the fish out of the bags and wash with fresh water.   Then dry off with paper towels.  This next step is very important and most people do not know this trick but I am going to show you.

Put the brined fish on cookie racks so the breath well.  Then get a fan and air dry the fish for at least 1 hour 30 minutes.

You can add your spices to the top of the salmon as it sets up.   Take a bowl and add the flavors you like, I add:

1 tablespoon of ancho seasoning, if you like a little more heat try cayenne.

Sprinkle evenly over the fish.

The fan is going to circulate air, you want the salmon to set and get firm so there is no liquid or wetness to the fish.  This seals the salmon from leaking oils later in the smoker.  I will show you later.

The last thing I do is put a little honey that I heated in the microwave to the top of the fish.  This is not important, but I like a little sweet and heat combo.

Once the fish is set up, I take it to the smoker.

Spray down the grates with olive oil or pam so it does not stick.  Add the fish so it is not overly crowded.

I strictly use alder for smoking salmon.  One thing to remember is that outside temperature affects the time of smoking fish.  If it was above 70 degrees I would get the smoke going, unplug the smoker, once it stopped smoking I would plug it back in.  The smoke session produces more heat and you do not want to over cook your salmon.  This session was 51 degrees out so I did not need to worry.  I did four trays of chips throughout this process because my dad likes a lot of smoke flavor and very dry.

I smoked this batch for 7 hours, and the current technique I use is pushing on the fish, if there is too much cushion feel than I smoke it more.  You can always cut a piece in the middle to inspect if you absolutely have too.

I only air-dried my fish for an hour, you see the white color in the middle of the last picture?  That is because it did not set up long enough with air.  It will not effect the taste, it is more of a visual flaw.

If you are not getting the temperature of the fish to rise because it is too cold outside, you can always finish in the oven after you rendered smoke in the oven at 225 degrees.

One Comment on “Smoked King Salmon for my Pappy”