Posted on November 2, 2011 by huntingchef

I met an old-timer the other day over coffee at the cafe in Grass Valley, Oregon that told me that 15 years ago you never saw an elk in this country because it was loaded with deer.  Now, it seems as though the tables have turned.  The problem with rifle hunting elk in the high desert is that they group up into large herds.  This always creates a problem for me and getting my hunters close enough to engage because the elk always put themselves in elevated positions with visual and wind advantages with good escape routes.  They also spread themselves out a half of mile to give 400 eyes a chance of seeing you.   The herd is usually on top of the canyons, but the big bulls like piece and quite.

My hunters arrive the afternoon before the hunt and we go up to our friends house on the hill to have everyone shoot their rifles and make some adjustments as needed.  As my followers on the blog already know, this is VERY important.

That evening we retire to the lodge for a few cocktails and a few hunting stories.

We had a great dinner and hit the hay for opening day hunt.  The first morning we were breaking into three groups.  I was taking a few guys up the gut, that means straight up the middle of the ranch while the other two groups stayed at the top and covered canyons and escape routes.  We set in and the three of us did not get farther than 300 yards into our hike when we saw the first group of elk up on top blocking my route to give me better elevation and visual.  So back down the trail we came and had to re-route down by the lake.  I do not like to do that because if you scare the waterfowl off the water the elk are bothered by that as well.  Wind was the only thing in our favor and that is by far the most important apect about hunting elk.  We get to the small lake and there is elk all around us.  We are within 250 yards, and each of my shooters had engaged targets with ease at that distance the night before, so I felt comfortable with them taking rested shots on an embankment.  We finally isolated the two largest bulls and decided to fire… and wham, wham, wham.  I was filming and did not see where they had hit, one hunter missed entirely.  The other hunter Shawn had hit his bull but I could not tell where.  So we began to track it but could not find any blood and tracked the elk across the canyon and I could see that he was not hit very hard.  The second day, we hunted a few areas and found that the elk had bedded down on top of the canyon with no way to get to them within 1000 yards because they had wind and visual in their favor so we let them lay and looked for other elk.

I took this picture to remind me of what I saw that morning while sitting on this perch.  As the hunters came down the camera I spotted a doe following what I thought was her fawn.  However, it was a bob cat.  They were both trotting and she followed him down the hill and thru the rim rock like they were buddies.  It was like a Walt Disney show.  I wish I had my video camera to film. You do not get to see those kinds of things every day.

The next morning we broke into groups again and Steve and I worked an area together down a canyon when I spotted a bull by himself below us on the other side,  bedded down.  He had the light hitting his golden hide just perfect so I was able to spot him. We snuck down and got into position just about 150 yards from him.  Steve put his bi-pods out and tried to secure a shooting position.  This task took some time because poor ole Steve was on a hill-side and could not find any comfortable position to shoot from.  He finally found something that may work and he looked like a contorted body that looked like it fell from a 120 ft. sky scraper.  I instructed him to take the bull only when he stood up and gave him a good side shot.  I snuck down below and to the right to get his attention and soon enough he stood up and Steve dropped him.  We were both excited because it was Steve’s first bull elk.  He had harvested some cows bow hunting, but this hunt was special to both of us. 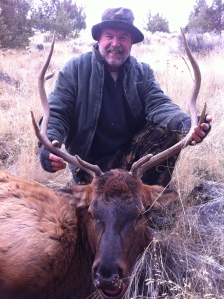 Steve’s first bull and what a pretty one to boot

We met up with some other of our hunters and Joe Dirt and I hiked up to get some transportation while Joe and Steve worked on the bull and drag him down to a landing we could get too.

That evening we hunted another area where we spotted about 200 elk on the side of the canyon just bedded down sunning themselves.  The only way to get to them was to hike from about 2 miles below underneath them.  Seemed like an easy task but it was a rocky side hill with lots of side canyons to cross.  We spotted a few bulls bedded down on the other side of the canyon and tried to put a hunt on them but we were traversing across these cliffs with huge 125 feet cliff below us.  We got on a rock outcropping to glass and we ranged them at 500 yards and a lot of scary territory in between us.  We would need a helicopter, so we pulled out.  We finally arrived about 600 yards below the herd but there were 6 spike elk feeding in between us, so we decided to out wait them.  An hour and half later they had only moved about 50 yards still feeding and running out of day light.  I decided to move up the drainage and if the spikes winded us hopefully they would move the other direction.  Which later they did not.  We got within 50 yards of the herd but they were above us with no shot.  We quartered them until they went into a very large field.  darkness was upon us and we could have engaged them at 350 yards but it did not feel right to me with distance and the last 5 minutes of shooting light and the thought of wounding a bull I decided to pull out and wait for the right moment.
The next morning I saw the elk and they were in a huntable location.  I took some hunters and some stayed in a different ambush location which we believed they would run into.  My hunters and I would have to hike in a thru a maze of canyons and try to find which one they bedded down in.  We found them and they were stretched out a mile it felt like.  We snuck within about 250 yards of the cows but we couldn’t see the bulls.  So we sat down for about an hour, when I saw two bulls coming our way about 50 yards and closing.  They stopped and then turned around.  We decided to try to out flank them and the wind was right but that shooting perch had no advantage to see the bulls, they were on the other side of the drainage.  We had to get closer.  We kept inching in thru the sage brush like little sage rats.  We were very close when we jumped three bulls, two were on my right at five yards and one out front about 30 yards.  I said take him meaning the big one on the right which Shawn could not see and he took the one on the left.

Then all hell broke out and I had to get my other hunter in position to shoot another bull, so we took off like Cherokee Indians running thru the brush to get around to the elk if they ran into the wind.  However, the herd went up….this meant we had to go up as well and with speed.  So Tim and I started up the hill as fast as we can and we are both winded.  The other hunters have engaged we could hear the shots as the elk headed across from us and stopped because they winded another shooter.  Tim fired and laid his first bull down.

I did not have my camera for all the elk taken because they were harvested at other locations in the canyons. We did have four in our vicinity and that is when the work began.  We had some friends hunting our  upper area on our place as well, and they took some bulls too.  This is what separates the men from the boys when the butchering process begins.

After I field dressed the second elk, I got a text from my wife that brought a smile from my face.  She had taken Mady to her first pumpkin patch and texted me a picture.  No matter how tired you are, it really put things in perspective. 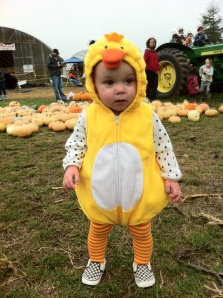 Mady at the pumpkin patch while dad is in the field.

The crew all met at the butcher shed and it became evident that this was going to be a lot bigger problem than I originally thought.  It seems like everyone got their elk, and there were a lot of elk.

We all got together and started the long hard butchering process and began putting the elk in the walk in cooler to get ready for the butcher.

Joe and Cory, good ranch hands were a force to be reckoned with.  They got all the heads ready as well.  I owe them a lot of gratitude because without these guys I personally would have been a serious world of hurt and I was really hurting.

The next morning, Joe wanted to get his bull.  So off he and Cory went and happened to find the wounded bull that was still with the herd from the first day when Shawn had hit him.  Turns out he was only grazed at the belly and Joe harvested him.

Joe Dirt and Shawn with the “I wished I wouda” Bull

It was a very succesful season with lots of action and hard work.  I hope my hunters understand that they worked very hard and that the biggest bull does not necessarily mean the best bull.  The average elk hunter in Oregon kills a bull once every 7 years.  They hunted hard and learned patience and the next thing they will learn is that biggest elk doesn’t always taste the best and to be thankful for the smaller ones when you reach into your freezer.

I hope everyone was successful with their elk hunts this year.  I look forward to posting some elk recipes up in the near future.

← When my baby wants a steak…SHE GETS A STEAK!
In Search of the Trophy Speed Goat →