Posted on December 9, 2011 by huntingchef

The Thanksgiving holiday we spent with some family friends at the beach, they made a traditional fantastic turkey dinner with all the trimmings.  Turkey makes me tired, not like just a little sleepy.  It is like some one hit me with a Rhino tranquilizer dart.  They say that it has DNA that affects us that way, but for me it is like a train hit me.  The next three days we spent on the different part of the coast with my buddy Wayne and Sherry.  This is where we first made the bone in pork loin.  The next day, we decided to take a 20 pound beef tenderloin that I brought and make it for dinner because we had a large group of friends were visiting for dinner.  Wayne said to me in his okey voice “Lets wrap that son of a gun in bacon”.  I replied “Bacon??”  He then looked at me with this strange look on his face and said “What the hell doesn’t taste good wrapped in bacon?”  He is correct about that so off we went looking for some good bacon. 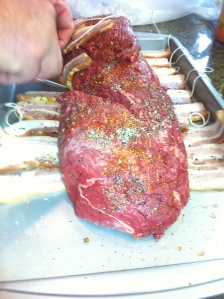 Season the meat with salt and pepper and a little cayenne

Wayne then uses his big mits and tries to tie the bacon individually.  This is a long, enduring process and I think I drink 4 beers during this entire process.
Wayne is so proud of his contraption.
So after we finished this process, we were like asking ourselves how we were gonna cook it because we rented a house that did not have a bbq.  I think that should be against the law not having a bbq, and if I am ever President of America I will make sure  I sign that bill.  Wayne and I head off to find a cheap bbq but we are at the beach with limited resources.  We found a store with a huge cast iron pot that our Tenderloin would fit in so we bought it.
Wayne then brushed it down with garlic butter.  I do not think this enhances the taste of the meat because it gets only on the bacon and you discard the bacon when serving.  However, the sauce at the bottom of the pan that you use for pouring over the meat is great.
Pull the meat at 135 degrees and let sit.  While Wayne waits to cut the meat I do up a batch of fried oysters.
Meanwhile after 5 minutes the tenderloin is cut.

After it is sliced, then it is put back into the pot and juices to be served family style.

This is Big Wayne proud of his accomplishment and it was very good!  This is our other buddy Shad.  He is staying about 4 blocks down the street and stopped by for a cocktail, but had to go home to eat dinner.  He was very sad.