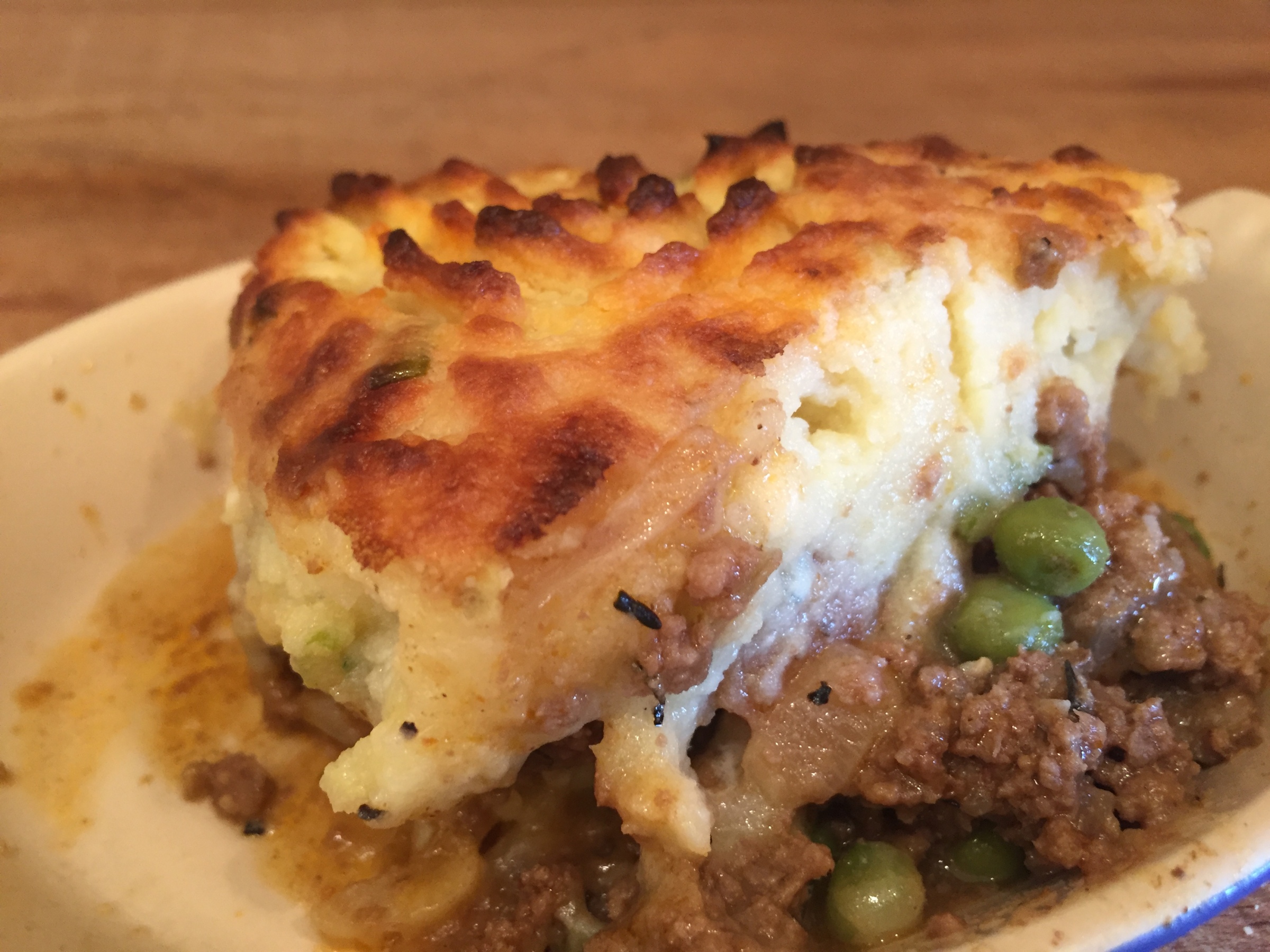 Hello everyone, sorry this took until late April to post.  But for all you Irish brothers and sisters out there, this one is for you.  St. Paddy’s day is a special day for us Nanna’s.  I have a tradition that I have been doing for as long as I can remember.  At exactly 11:00 on the dot, I head to Clancy’s in Sherwood to have my traditional corn beef and cabbage lunch, drink a green beer, and listen to the boys on their bag pipes and drums.  I love it.  Then that night, I make something special for my family.  This one, is absolutely awesome.  Lets get rolling.

First we pour a little Guinness and turn on some music.

Now, you need to make a decision here.  You can double the recipe and vac pack remainder then freeze for later to make another pie or save it for something later.   I would suggest that, because I have another little trick for you coming up.  It sort of looks like this:

You can make these little bombs….I’m so hungry typing this I can hardly stand it.

We will get to these later.  Lets get rolling on cooking the Shepherds pie.

Take the elk burger, and add the 2 tablespoons of water and baking soda, toss some salt and pepper in with it and mix it well and let sit for about 20 minutes.  People always ask how much salt and pepper?  You know what you like so sprinkle it on like you own it.

Place potatoes and 1 tablespoon of salt (I tell you here how much but you are not eating it) and add water to cover taters and cook for ten minutes until potatoes are done and tender.  Drain the potatoes.

In a bowl, combine milk and egg yolk and mix together then add potatoes and begin mashing them.  Stir in scallions and blue cheese, salt and pepper.  Mash until smooth.

You are probably asking “Why the blue cheese?” It gives a unique bite to it that I just love.  Trust me on this, the combined flavors are going to be perfect harmony. Cover and set aside.

Heat oil in skillet over medium heat and add chopped onion and mushrooms and cook until they are soft about 4 to 6 minutes. Chop the potatoes into smaller chunks than you see in this photo. 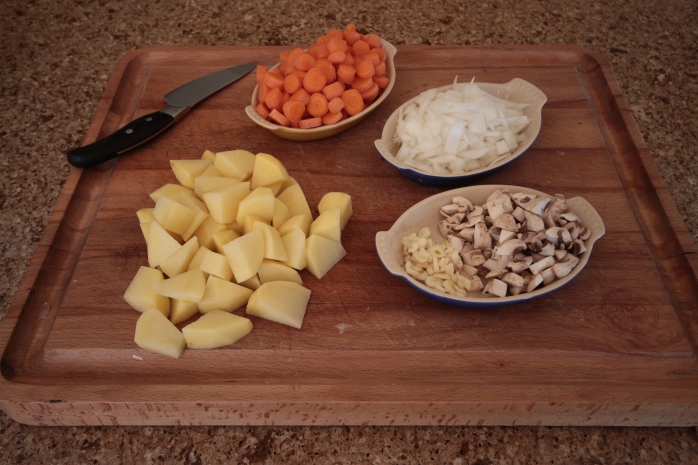 Stir in tomato paste and garlic and cook until bottom of skillet is dark brown.  Stir in madeira,  scraping up any browned bits, and cook until evaporated, about 1 minute.

Stir in flour and cook for 1 minute.  Stir in broth, Worcestershire, bay leaf, thyme, and carrots.  Bring to a boil and scraping up any brown bits.

Reduce the heat to medium low.  Pinch the beef to 2 inch pieces and lay on top of mixture in skillet.  Cover and cook until beef is cooked through,10-12 minutes, while stirring and breaking up meat chunks.  Combine cornstarch and remaining 2 teaspoons of water in bowl, stir it, then add it to the bowl.  Continue to simmer until sauce thickens up  Remove thyme, and bay leaf.  Add cayenne pepper to taste, along with salt and pepper.  I like a little heat to it, and that will pair well with the blue cheese mashed potatoes.  Adds a little depth.

Put the mixture into a pie dish.  Then put a shamrock necklace next to it so people don’t focus on the ugly pie dish thing you are rocking.

Place the mashed potatoes into a zip lock bag, snip the corner off one end and create a 1 inch opening, then pipe the potatoes evenly then spread them with the back of a large spoon.  Megan used a fork on top to make a shamrock. Place on cookie pan so it doesn’t over flow, and broil for 10 minutes until brown.  If you are going to wait and cook later, bake at 400 degrees for 20-25 minutes until golden brown.

Let cool slightly, then serve.  Get ready for your St. Paddy Palate to get blown away.

Now don’t you want to take a bite of this?

Okay, now we come to the part of the story if you actually made extra filling?  You can freeze it and make another one later, or you can get two things of frozen pie crust and party on.

Thaw the pie crust, and get a package of sliced American cheese.  It melts better and has better consistency.  Get a nice 3 1/2-4 inch biscuit cutter.  Put some flour down on work place. 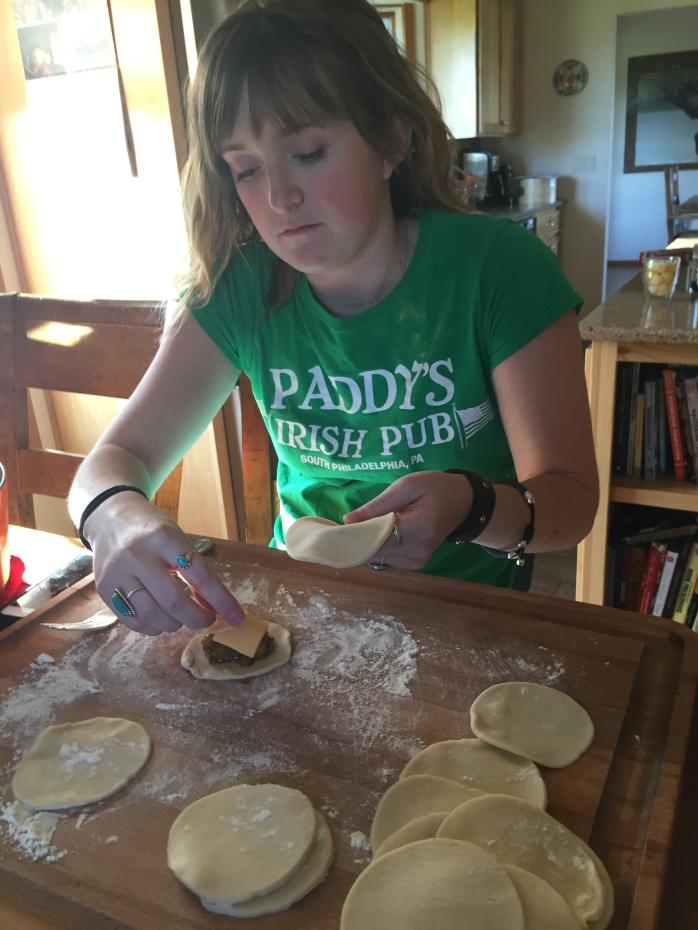 Here is my oldest Irish American daughter, Megan placing cheese on top of the mixture.

Mix one egg with one tablespoon of water.  Place one round down, add a scoop of mixture, put cheese on top and place another round on top. Use a fork to go around the sides. 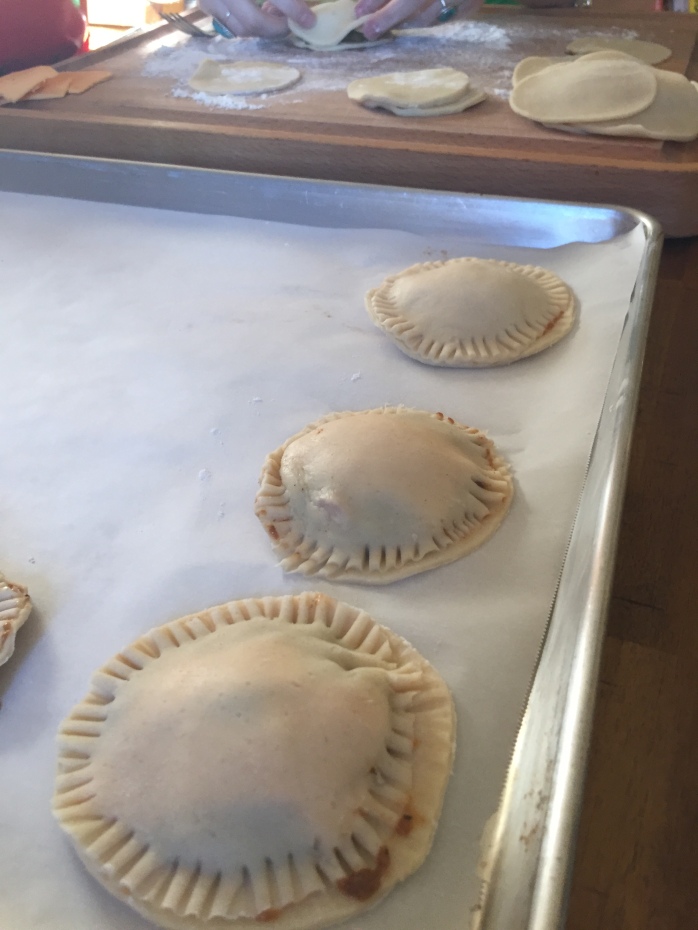 Lay them on top of parchment paper on a cookie sheet, and take egg wash mixture and paint the top. Start oven at 375 degrees.  Bake for 25 minutes or until golden brown.

These little pieces of gold are amazing.  They got ate up over two days.  They were even better the next day.

That is a great St. Paddy Day.