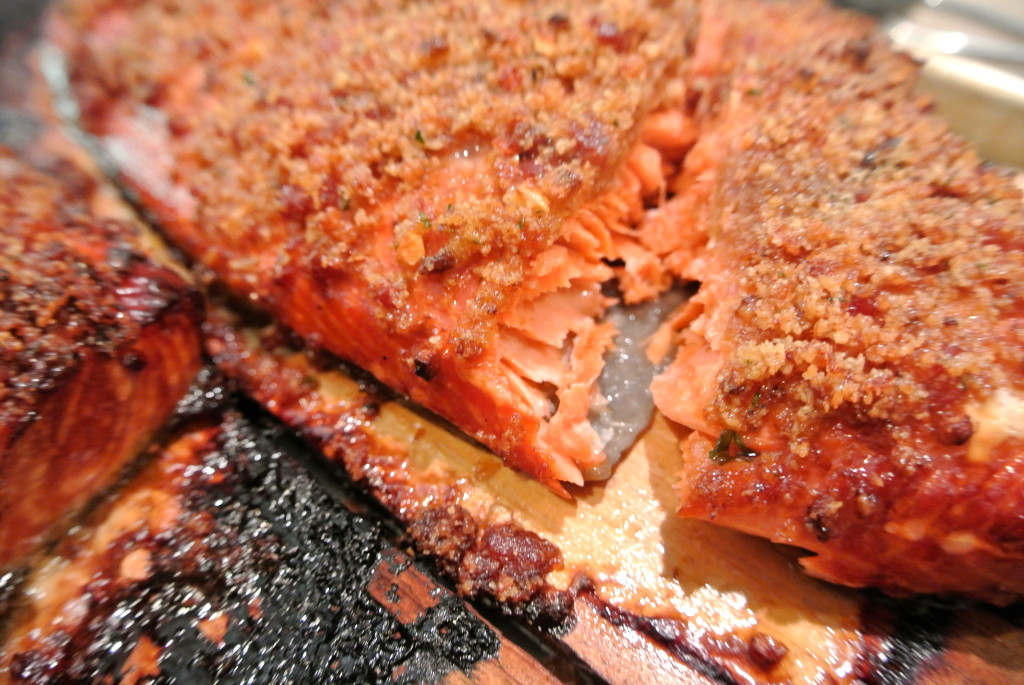 I am always doing research on food and recipes.  I know I am coming into one of the best Oregon salmon seasons in the next few weeks so I am mentally preparing and conducting my research.  I know my clients are going to ask me what to do with their fresh caught salmon.  I came across this recipe in a cook book called “Fire and Smoke” by Chris Lilly.  I highly suggest his book, it is very good. So a little shout out to Chris, keep up the good work because I really liked your style.  When I made this dish, not one person in the group could identify any of the components, especially the nice crunch of the bacon.  Give it a try it will blow you away. Take two cedar boards and submerse in water while you put everything together.  Sometimes I do this the night before.

In a small bowl, combine all the ingredients above.  Take your salmon filet (2-3 pounds, about 1 1/2 inch thick) and use a 1 gallon ziplock bag, put the salmon in ziplock and pour over salmon.  Measure out 1/4 cup of marinade and set aside for glaze.  Put the salmon back in the fridge and marinade for about an hour.

Put a large skillet over direct heat, add the bacon and cook until it is blondish-brown BUT NOT CRISPY. Transfer bacon and the grease to a food processor, add the panko and process until fine crumbles are formed.  Transfer to a baking sheet, arrange them tightly on an area that is the same size as the filet. Start your Traeger and get it to 450 degrees if you can, if not try as hot as you can get it but do not go over 500 degrees. Remove the salmon from the marinade and press the pink flesh side down into the bacon crumbles.  Lay the salmon on the cedar plank, skin side down.  Put the cedar plank on the grill grate in the Traeger bbq smoker set on 400-450 degrees or as hot as you can get it.  If you are not using a Traeger grill, just use a regular bbq and keep an eye on it.  If the boards catch on fire, move them to the other side of the grill that is not lit, only light half of the gas grill is what I am saying.  Close the lid and let cook until the samon and bacon crust browns, about 8 minutes. Meanwhile take the reserve 1/4 cup of marinade and mix with maple syrup in a small bowl to make the glaze. Open the grill lid  drizzle the glaze over salmon and cook until the salmon until the temperature reaches 130 degrees, about 7 minutes.  Remove the cedar plank from grill and let salmon rest on the plank for 3 minutes.  I usually serve family style straight off the plank.

This dish has some very interesting complex flavors.  The crispy bacon on top, along with the glaze brings not only an awesome texture but a smokey sweet finish.  This recipe had people who were not a fan of salmon going back for seconds.

I hope you get out this year and land some Kings and Silver Salmon this year.  I can hardly wait, it is going to be the best salmon run of my life this year on the Columbia River.  Perhaps I will see you out there.